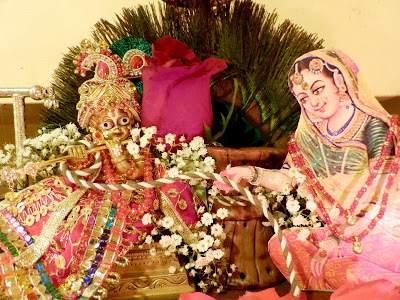 On the day of Diwali, my Damodar continued to enact his lila by allowing Mother Yashoda to bind him. This pastime is described by Srila Prabhupada as follows:

Mother Yaśodā chased Him to all corners, trying to capture the Supreme Personality of Godhead, who is never approached even by the meditations of great yogīs. In other words, the Supreme Personality of Godhead, Kṛṣṇa, who is never caught by the yogīs and speculators, was playing just like a little child for such a great devotee as Mother Yaśodā. Mother Yaśodā, however, could not easily catch the fast-running child because of her thin waist and heavy body. Still she tried to follow Him as fast as possible. Her hair loosened, and the flowers in her hair fell to the ground. Although she was tired, she somehow reached her naughty child and captured Him. When He was caught, Kṛṣṇa was almost on the point of crying. He smeared His hands over His eyes, which were anointed with black eye cosmetics. The child saw His mother’s face while she stood over Him, and His eyes became restless from fear.


Mother Yaśodā could understand that Kṛṣṇa was unnecessarily afraid, and for His benefit she wanted to allay His fears. Being the topmost well-wisher of her child, Mother Yaśodā thought, “If the child is too fearful of me, I don’t know what will happen to Him.” Mother Yaśodā then threw away her stick. In order to punish Him, she thought to bind His hands with some ropes. She did not know it, but it was actually impossible for her to bind the Supreme Personality of Godhead. Mother Yaśodā was thinking that Kṛṣṇa was her tiny child; she did not know that the child had no limitation. There is no inside or outside of Him, nor beginning or end. He is unlimited and all-pervading. Indeed, He is Himself the whole cosmic manifestation. Still, Mother Yaśodā was thinking of Kṛṣṇa as her child. Although He is beyond the reach of all senses, she endeavored to bind Him to a wooden grinding mortar. But when she tried to bind Him, she found that the rope she was using was too short—by two inches. She gathered more ropes from the house and added to it, but still she found the same shortage. In this way, she connected all the ropes available at home, but when the final knot was added, she saw that the rope was still two inches too short. Mother Yaśodā was smiling, but she was astonished. How was it happening?

In attempting to bind her son, she became tired. She was perspiring, and the garland on her head fell down. Then Lord Kṛṣṇa appreciated the hard labor of His mother, and being compassionate upon her, He agreed to be bound up by the ropes. Kṛṣṇa, playing as a human child in the house of Mother Yaśodā, was performing His own selected pastimes. Of course, no one can control the Supreme Personality of Godhead. The pure devotee surrenders himself unto the lotus feet of the Lord, who may either protect or vanquish the devotee. But for his part, the devotee never forgets his own position of surrender. Similarly, the Lord also feels transcendental pleasure by submitting Himself to the protection of the devotee. This was exemplified by Kṛṣṇa’s surrender unto His mother, Yaśodā.
Kṛṣṇa is the supreme bestower of all kinds of liberation to His devotees, but the benediction which was bestowed upon Mother Yaśodā was never experienced even by Lord Brahmā or Lord Śiva or the goddess of fortune.

The Supreme Personality of Godhead, who is known as the son of Yaśodā and Nanda Mahārāja, is never so completely known to the yogīs and speculators. But He is easily available to His devotees. Nor is He appreciated as the supreme reservoir of all pleasure by the yogīs and speculators.
Krsna Book Chapter 9: Mother Yashoda Binds Lord Krsna
Posted by Vijay Teli at 5:26 PM 2 comments:

This tutorial for these intricate belts was put together by Raghunath Prabhu from Alachua. Please check out his blog: Radha Madan Mohan- The all merciful Ones where you can have darshan of his deities and the amazing jewelery he makes. Their jewelery is so well made I'm sure it will be a great source of inspiration and ideas. 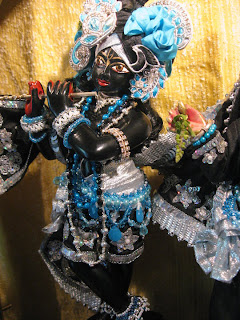 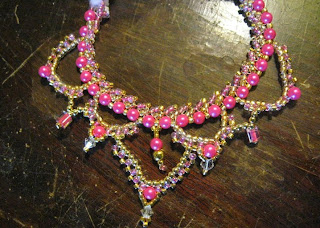 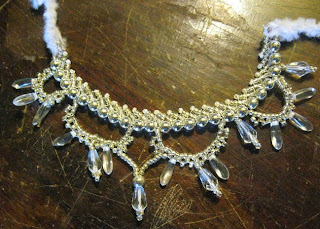 The tutorial demonstrates the process for creating the base of these belts, from there you can let your creativity flow and the possibilities are virtually endless! 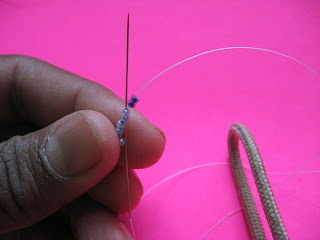 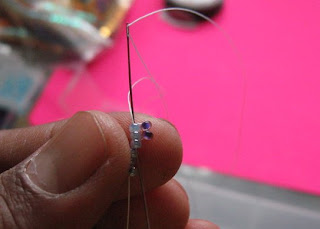 Step 2: Now string on a gold seed bead (you cant see it in this pic) and come down through three blue seed beads. 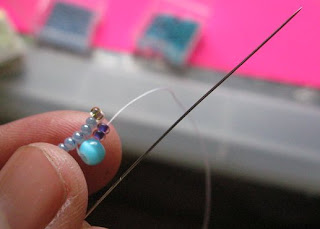 Step 3: Now string on your bigger bead on and go up through the two purple seed beads. 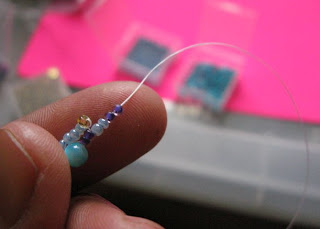 Step 4: You have now finished one round of this pattern. Now string on add two blue seed beads and two purple seed beads. 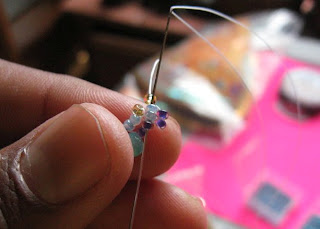 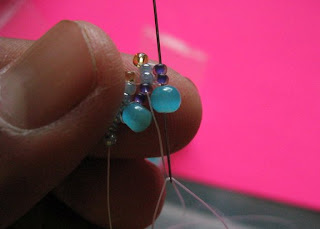 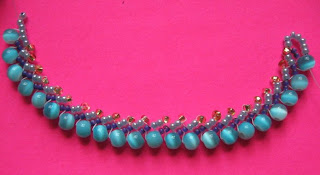 Step 7: When it is as big as you want it, make a little loop of beads and go into the bottom big beads. 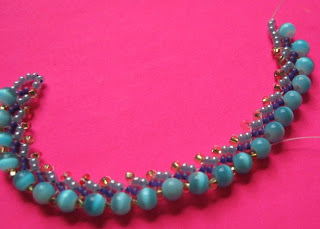 Step 8: Now in this step you can decide how circular you want it.The more space you take up at the bottom the more circular it will be. At this step I go back to the other side sometimes adding seed beads until I get to the other side. I then make a loop on that side. 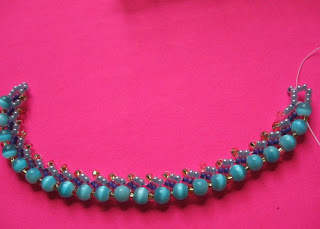 Step 9: When you get here you can let your creativity free. You can now do whatever you want to make a beautiful belt. I would like to see some your creations for your deities. Good luck. Ask questions if you would like. 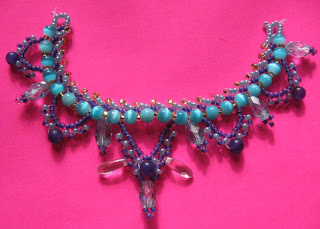 Special thanks to Raghunath prabhu for putting this together (originally in the Home Deity Sewing and Jewelry FB Group).
Posted by Vijay Teli at 10:03 AM 2 comments: 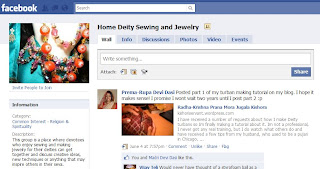 Who would have though Facebook of all places would be the perfect venue for devotees to share ideas and tips for deity sewing and jewellery. A few weeks ago I was invited to join the Home Deity Sewing and Jewelry Facebook Group. Since then the group has been a great source of inspiration for new projects as well as a nice venue to share pictures and ideas. I suggest everyone to check it out!

Group Description:
This group is a place where devotees who enjoy sewing and making jewelry for their deities can get together and discuss creative ideas, new techniques or anything that may inspire others in their seva.
Posted by Vijay Teli at 11:42 AM 4 comments: 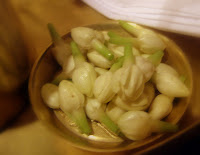 One of the advantages of living in a diverse metropolitan city is that exotic items are readily available for offering to their lordships. For some time I've wanted to offer nice fragrant flowers to my deities. However most of the commercially grown flowers available in the market are virtually scentless. So for Nityananda Trayodashi I wanted something different, luckily I was able to find a store that regularly gets fresh jasmine from India. The simple jasmine (mogra) buds made perfect garlands for Gaura Nitai, thier sweet fragrance filling the altar. 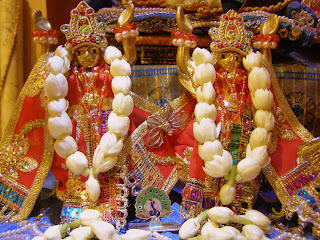 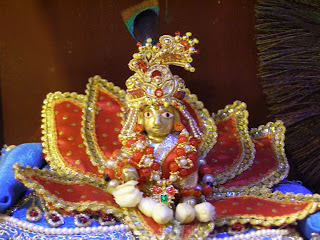 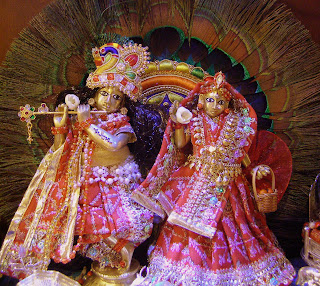 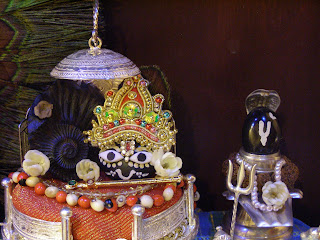 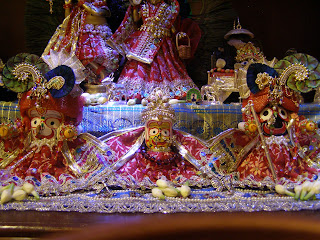 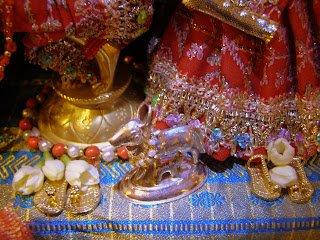 With fall well underway and the cold weather already here, I decided it was time to bring out my Deities' winter clothes. With the cold Canadian winters I had always wanted to try and knit some scarves for my Deities, however my attempts never quite worked out. These sweaters and scarves were knitted for them by one Mataji last winter. If anyone with experience knitting would like to share some tips please leave a comment. 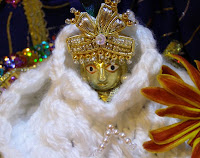 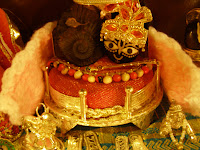 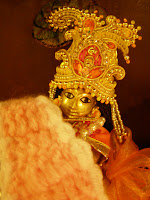 Month of Kartik Around the Corner! 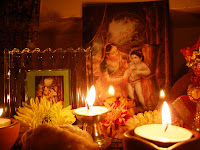 The month of Kartik is just a few days away (beginning on Saturday, October 3rd). This auspicious month also marks the one year anniversary of this blog! I am currently working on some new posts that will hopefully be ready soon. As always any suggestions for content are always welcome.

As a special treat, you can view a wonderful animation of the Damodarastakam prayers (complete with lyrics and translation) below:


Animation from my other blog: http://www.torontokrishna.com/
Posted by Vijay Teli at 9:39 AM No comments: 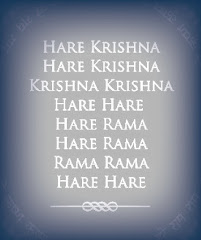